Every kid grew up with that chair. You know, when you walked home from school and slung off your backpack; the one you plopped down into and watched the 4pm episode of Gilmore Girls on. The one you stayed up until the wee hours playing Spyro The Dragon on PS1 in. The one that was directly beside the family desktop computer, where you had to be home from school quickly so you could get on AIM to message the friends you JUST left at school. Yeah. This was that chair for me.

My parent’s bought it, along with two other sofas of the same pattern shortly after we moved to the house I grew up in, around April of 1998. I was about 7 years old then. So, when my mom decided she wanted to finally replace it a few weeks ago (almost two decades later), I can hardly blame her, but I couldn’t help but feel a bit of sadness. I grew up on that chair.

So, as most great journeys and adventures begin, it started with a google search for “reupholstering an armchair”. 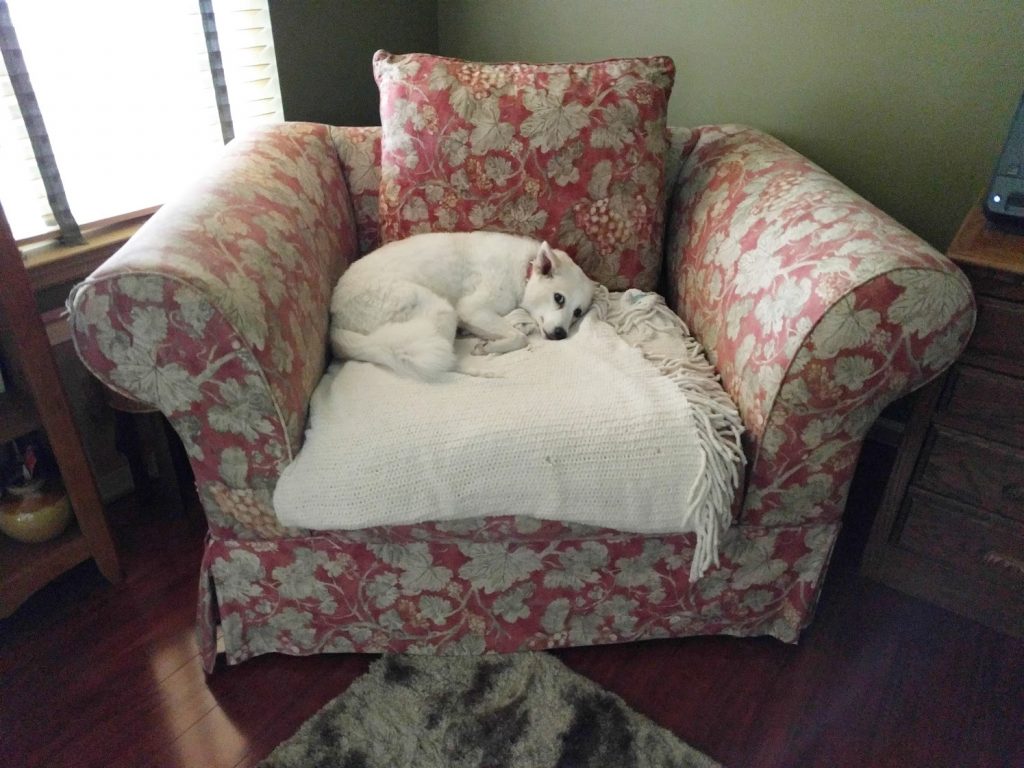 One last shot of the chair in it’s original habitat. Since I graduated highschool, went through college and subsequently moved out, Mia has taken my place in making sure the chair gets used. Structurally it is still very sound. However the fabric was tearing at the arm, cushion was ripped and frankly smelled like dog. 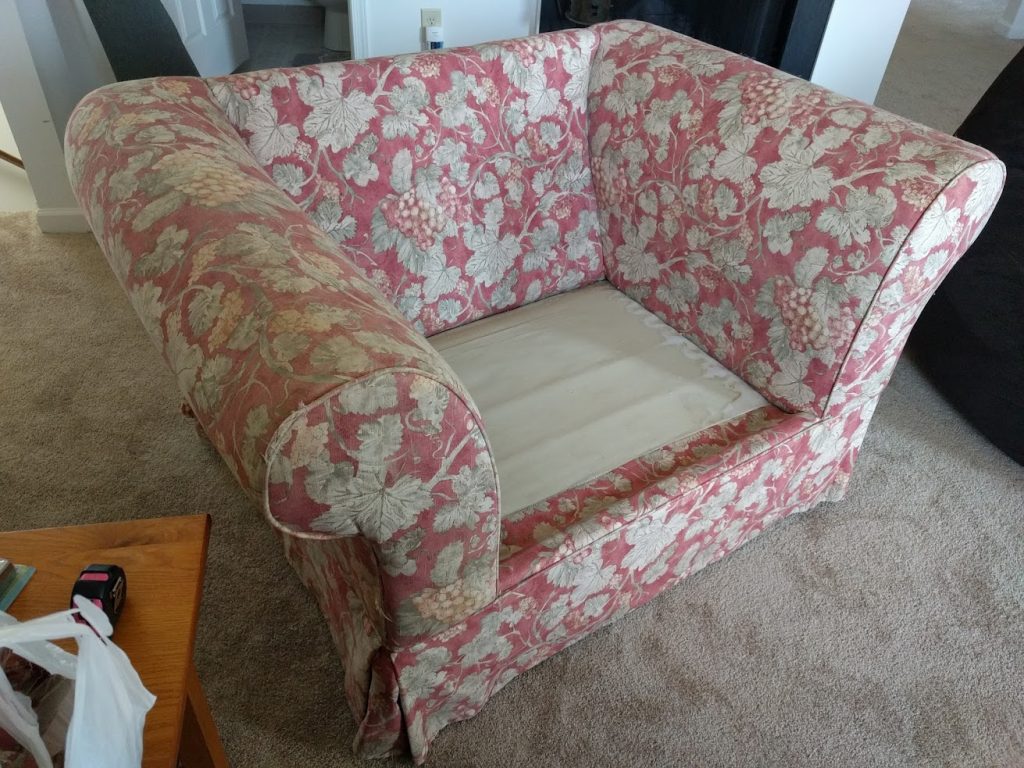 The chair finally made it to my apartment. 90’s floral pattern…so not in right now. 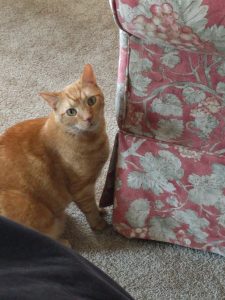 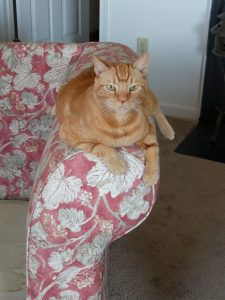 Huntley was my mom’s before I brought him to live with me. After much sniffing he remembered the chair and sat on it exactly like he used to. 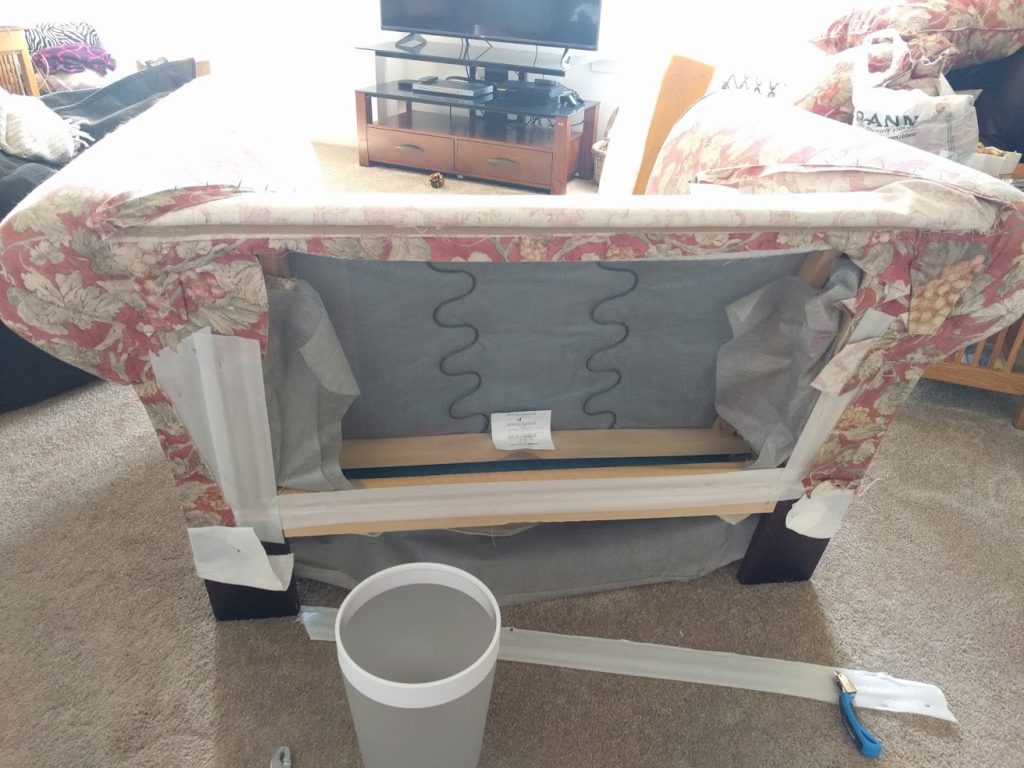 Saturday I spent almost 5 hours pulling out what felt like thousands of staples. This was by far the hardest part of this whole process, physically and time consuming wise. It’s imperative to get the pieces of fabric off without ripping, because they are the pattern when cutting new fabric. 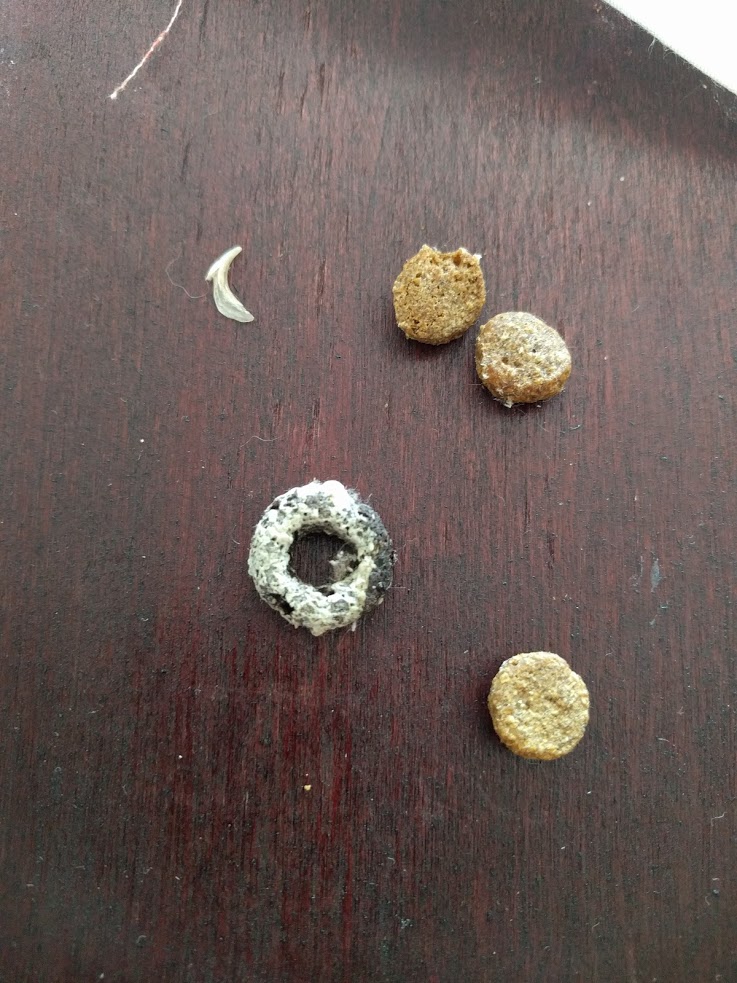 Amongst the treasures buried deep inside the chair: A cat nail from god knows what cat. (seven have come in contact with that chair in the past 20 years), regurgitated dog food, and the WINNER: an Oreo-O cereal piece, which I haven’t eaten in a solid 15 years. Yummy. 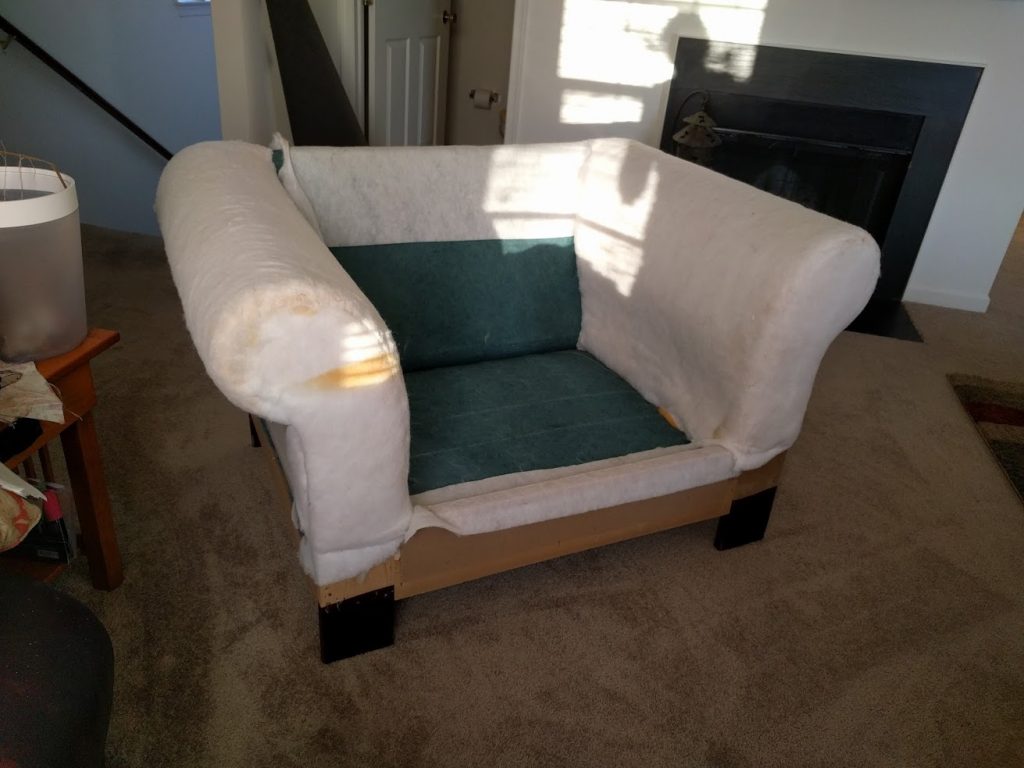 At the end of the day I had a completely naked chair. The padding was still in pretty good condition.

I had bought myself a sowing machine when I figured out I would be attempting this project. Even if I botched the chair, I figured it would be a good thing to have. The bad news is I hadn’t used one since Home-Ec class in 8th grade….over a decade ago. (that hurts to say) Even then, we only made pillows, so I was pretty unsure about it. 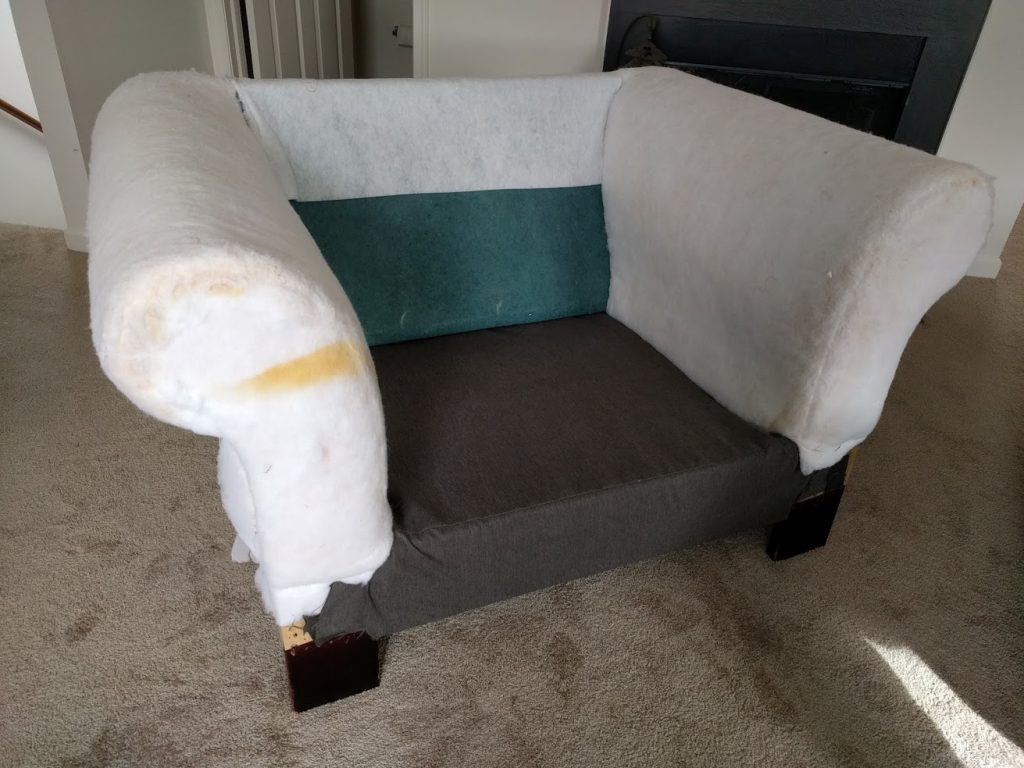 Luckily, only the bottom fabric and the arms had to be sown. The bottom fabric in a straight line, which was fairly easy. The arms however where very difficult, but I think they turned out okay. 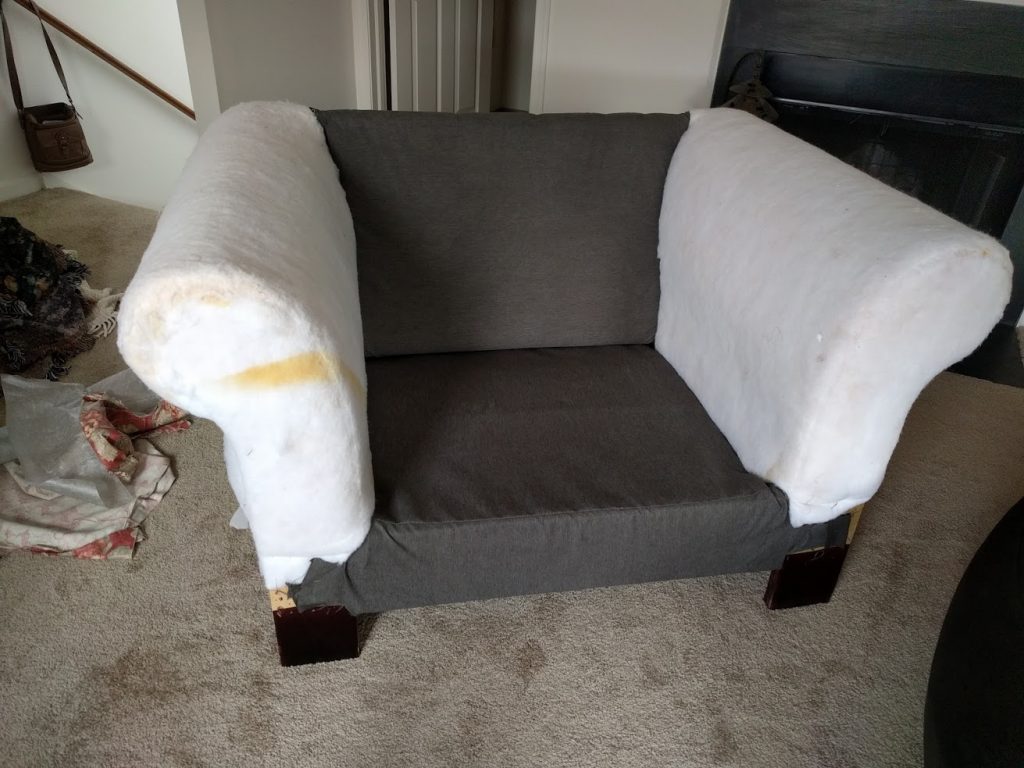 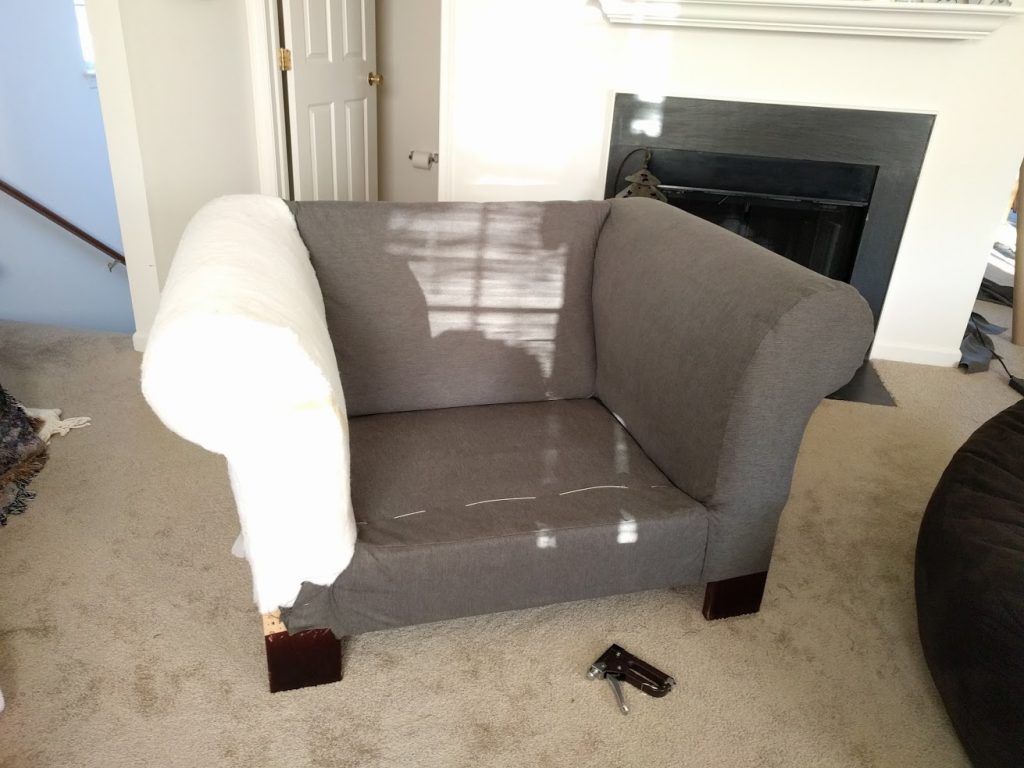 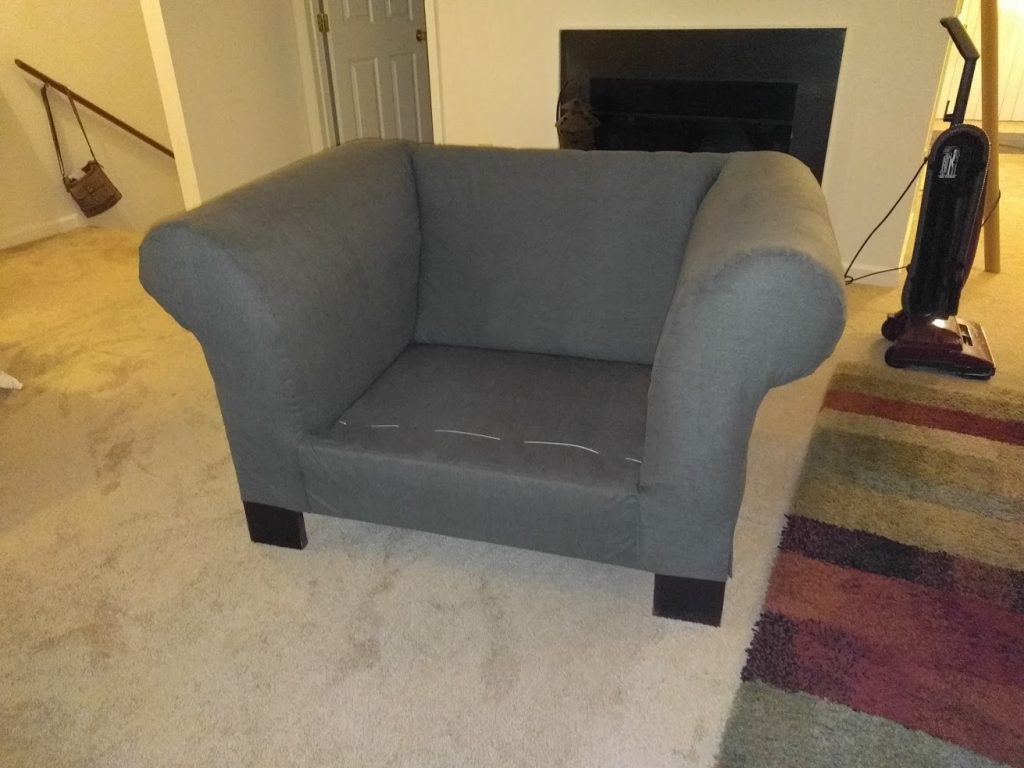 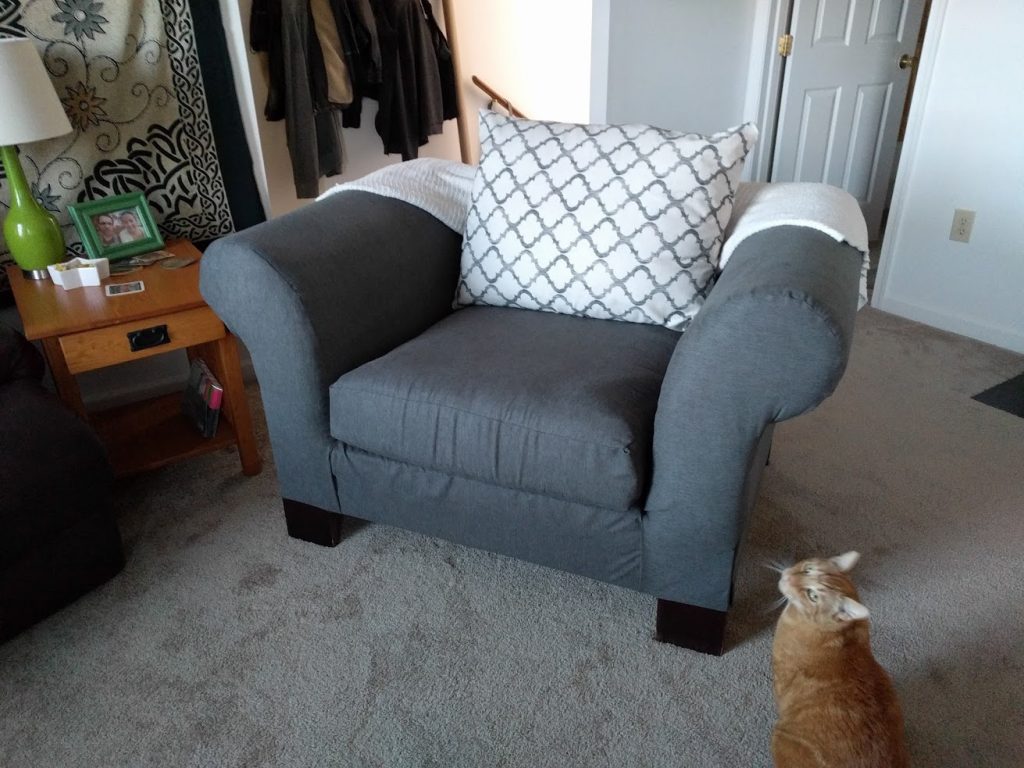 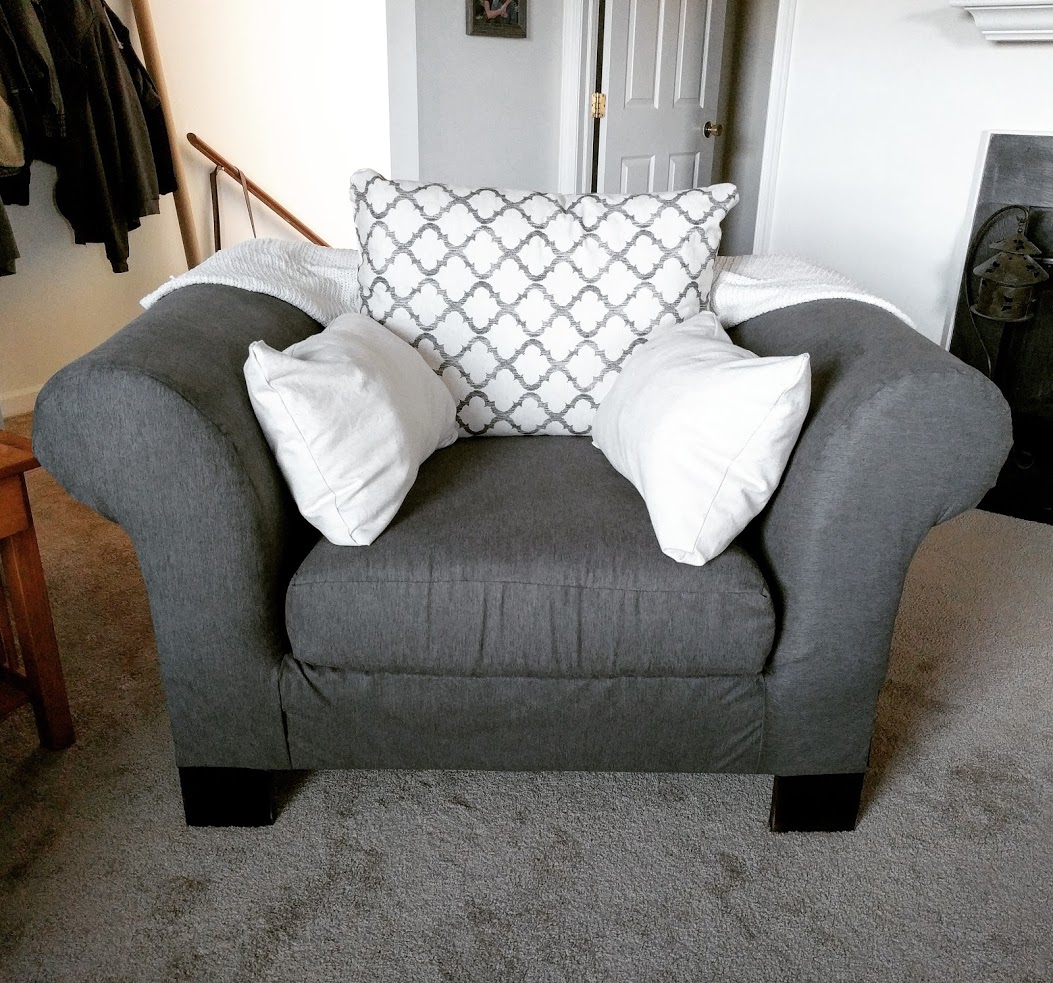 So, now I have a new chair that comes with a whole lot of memories, for a fairly low price. I’m super happy I decided to take on this project. Once Mike and I have a house and I have more space to work this is definitely something I could get into doing. 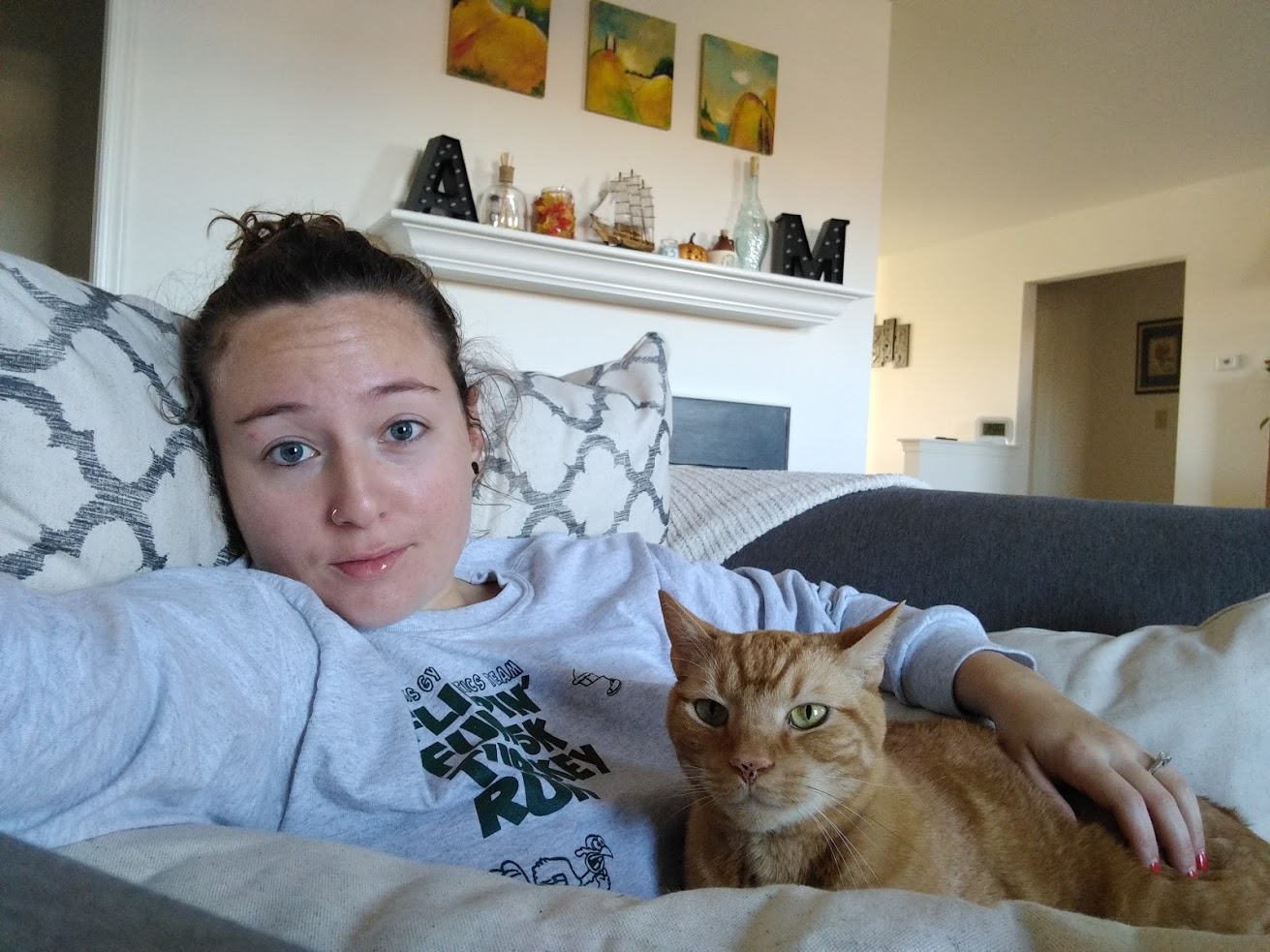 Now it’s Monday morning and Huntley and I spent some time relaxing in our new chair until it’s time to get to work. Thanks for reading!